At birth, the newborn spends more than 16 hours a day sleeping on his back, on a hard surface. The skull of the infant, during the first weeks of life, is very soft and malleable. The flattening is caused by prolonged periods of sleep on the back and / or sitting position since the head of the baby is rotating on one side. This unilateral position of the head is often related to a birth torticollis which ensures that the child cannot place or keep his head on both sides and that even with the intervention of the parents.

Plagiocephaly is defined by the following asymmetries of the skull and according to different degrees of severity: one half of the back head is flatter, with the forehead and the ear more advanced on the same side. The front on the side opposite to the bulging one looks flatter and the eye on that side is smaller than the other. Overall, the head looks like a parallelogram shape when viewed from above.

Another form of flattening of the skull is positional brachycephaly. It is defined by a dish in the center, behind the head, which causes a compensation: the enlargement of the face. The absence of roundness of the back of the head, in some cases, gives in profile view an elevation of the skull in the shape of a point.

In clinical practice, malformation or flattening of the newborn's skull is noticed by parents or diagnosed by physicians and other perinatal care workers. Despite the fact that asymmetries could already begin to be formed from birth. They are usually noticed around the age of 2 to 4 months.

When should I be concerned about a flat head?

The flattening of the skull usually appears around the age of 2 months. The weight of a newborn's head is relatively heavy compared to the rest of his body. The weakness of the neck muscles makes his head tilt to one side or the other when he sleeps. If baby is still sleeping in the same position, the bone behind the ear will gradually flatten.

The more the child has a big head, the less his muscles are able to support it, increasing the risk of a flattening. Preterm babies, boys (they have less energy than girls at this age) and those with a disease that harms development are more susceptible.

This situation is more common since sleep on the back is the recommended position to prevent sudden infant death. Most often, flattening only appears on one side, but sometimes we see a complete flattening of the back of the head, as if the neck was extended to the top of the head.

The risks are greater when baby often stays in the same position for a long time. This is the case when using a shell that fits the stroller, the car seat, the supermarket basket, etc. The baby does not leave his shell and this immobility leads to a unique sleeping position that may mold the shape of his skull.

Position on the tummy

Should we put baby on the stomach is a question that comes up often. Since the recommendation of "Dodo on the back", the incidence of sudden death of the newborn has decreased by 40% 1 . However, many parents are now worried about placing their child on their stomachs during their waking moments. This lack of time on the stomach can contribute, for example, to earlier motor delays and plagiocephaly. In the long run, this can affect the overall development of the child's ability to learn to catch objects, crawl and crawl, stand and walk.

It is important to start putting baby on his stomach from birth, a few minutes at a time for a total of about an hour a day, and until the age of three months 2 . Babies often complain when placed on their stomachs. The sooner you start after birth and maintain a regular time schedule on your stomach, the more your child can strengthen his neck, trunk and shoulder muscles. Variation of your child's position is very important to help build muscle strength3. 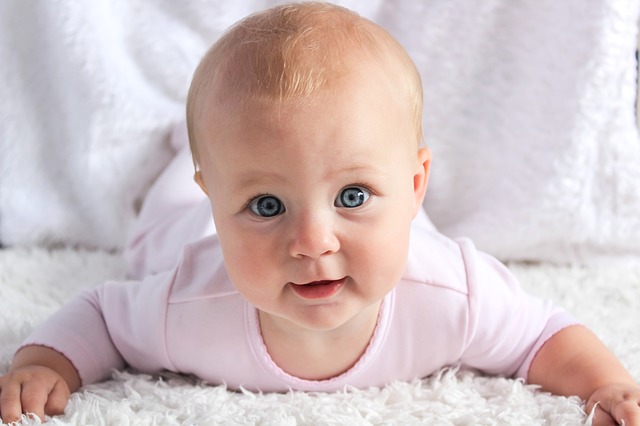 Here are some suggestions to help you place baby on his stomach:

Place baby on his tummy a few minutes after each diaper change. You can have a rolled towel under his arms to raise him a little.

Take a stroll around the house by holding him on your forearm facing the floor. Always keep your arm close to your body;

Lie down with baby belly stomach; be careful to always keep your hands on baby to prevent it from falling. Since a newborn does not lift his head much, vary the position of the head (right and left) to prevent him from developing a preference;

Use a mirror to keep baby interested during his tummy time. Baby likes to look at himself;

Lay your baby on your thighs by keeping one hand on his buttocks to prevent him from rolling. Alternate by placing the baby's head on your right or left thigh.

Some babies have a flat head at birth, the molding of their skull being done in the uterus (eg when the baby has descended rapidly into the pelvis during pregnancy or under constraints of related spaces at the birth of twins). Any visible deformity at birth must also be evaluated quickly, to eliminate other causes than molding.

Preventing Flat Head: How do you shape a baby's head?

It is important to vary the support of baby's head from birth. When you put him in his bed, make sure his head is not always turned to the same side.

When he has the ability to turn his head by himself, you can alternate his orientation in the bed by setting it to either the head or the foot of his bed. A sound source or a visual animation will attract his attention and encourage him to turn naturally to the desired side.

When awake, it is suggested to keep your child in various positions, where his head is clear and without constant pressure. Putting him on your stomach is very beneficial for its development. He will learn to better control his head. It will be even more receptive if you put him on a table, at your height, so that he can interact with you.

Using a soft carrier can also reduce the risk of developing a flat head. 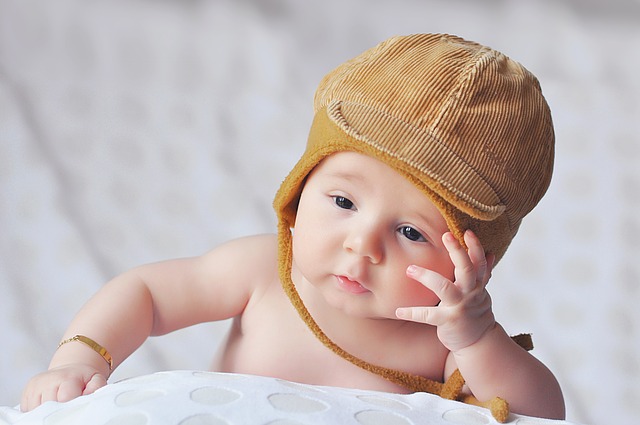 How long does it take for a baby's head to shape?

Skull formation is a process that lasts until the age of 2.
•The skull consists of 6 bones that are not yet fused. They are linked together by sutures and empty spaces called fontanelles.
•The easiest to spot is the anterior fontanel, located just above the head and is of soft consistency. It usually closes around the age of 6 months to 18 months.
•It is normal for the fontanelle to move with your breath or to raise your baby if your baby is crying, especially if he is lying down. On the other hand, if you notice a continuous bulging of the fontanelle, when your baby is in a sitting position, or if it is not yet closing after the age of 24 months, it is important to consult a doctor .
•The bones of the skull gradually enlarge as the brain grows. Each bone takes its place and sits in a timely manner with its immediate neighbor, filling all the spaces.
•Around the age of 2, the skull will almost be made up of a single block. The bone that constitutes it will be finally the most formidable carapace of our body.

How do I fix my baby's flat head?

It is important to consult your doctor if you notice that your baby has a flat head. Treated early enough, the vast majority of deformities of the head eventually fade. Other causes (torticollis, premature closure of a suture) can cause deformity of the skull and will require other types of treatment.

Changing the position of baby regularly is usually enough to restore the shape of his skull in a few months. Physiotherapy exercises can help promote the range of motion of the head and require the advice of a professional.

In rare cases, one will use helmets to help the head to recover its form. These are especially useful if the deformity has not improved by the age of 4 months. They are less effective after 6 months of age. Some studies published in recent years question even their use.

The flat head is usually only an aesthetic problem. However, even if it does not disappear completely, it will be little visible in adulthood. It does not compromise the growth of the brain or the development of the child.

How To Massage an Infant

Note: Hypertext links to other sites are not updated continuously. It is possible that a link can not be found. In such a case, use the search tools to find the desired information.